Happy New Year! After a few days 100% dedicated to the family is now time to return to the gaming table. What to expect for this first days of 2018 ?

For Blood on the Blade I’m completing a new enemy sheet with the  Araknos (Spiders): this will make possible to use the Spiders in your standard BoTB campaign with some special rules to introduce the hatching areas in the map. Expect the Araknos to be published here in the next days.

Blood on the Dungeon currently include a linear exploration mission, where you basically move inside the Aghamon Crypts looking for loot and fighting monsters (that’s what dungeon crawl is). I’m finalizing several “final rooms” with unique enconters to cover missions in the crypts aiming at a specific location: think about quests where your warband has been charged of finding some long lost artifact or instead is trying to reach an area following the directions of some rumors/legends.  This content will appear as an update to the BoTD package on Wargame Vault.

The next Aghamon Gazette will include the rules for mounted characters (and enemies), in order to expand the tactical options of your warband.

Later this year (February ?) another game in the “Blood” series: this will be a new title using the same engine of BoTB but with a totally different background…

So, enjoy this new year, that I sincerely hope will be more generous of the 2017, and stay tuned.

The dungeon crawl expansion for BoTB is finally ready (here below the cover) and is now available here on Wargame Vault. There’s virtually no limit to the content that could be added to dungeon scenarios so let me know if you like this type of game or if instead you prefere a classical skirmish session.

In the meantine, I take this opportunity to wish you and your families a wonderful Christmas. Buon Natale from Italy! 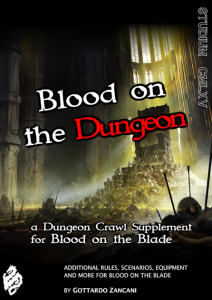 I’m not 100% sure if I will be able to release some free content this weekend: I’m currently working on the Dungeon Crawl rules that I’m planning to release before Christmas and this task is taking more than expected (because I always add new elements every time I start working on it).

The Dungeon Crawl rules will be published as the second volume of the Aghamon Gazette (free, of course) later next week so start preparing your dungeon tiles!

(Edit) Probably I’ll upgrade the new content to an full expansion: “Blood on the Dungeon”

On the extreme east of the Known Lands begins the Endless Ocean: fierce currents and stormy winds in the opposite direction make the navigation nearly impossible toward the East of this immense sea. Still, a continent is living here, covered by deep jungles and crossed by rivers so large that you cannot see the other bank. Legends says that in the wilderness, great predators long extinct elsewhere still survive, and an ancient race of Lizardmen rules this unexplored world.

Lizardmen are one of my all-time favourite fantasy characters and I’m working on a mini-campaign to introduce them in the world of Aghamon: but in the meantime you can play with this new enemy and let me know your comments/critiques.

The Enemy sheet is available here.

The most common request for Blood on the Blade expansions is “New enemies”! Since for many reasons BoTB is *your* game, I’m now focusing on a few new enemies to publish in December: thanks to the bank holidays in Italy one of them will surely be published in the next days (Saturday?).

I’d like also to complete the playtest of some additional Exotic Weapons to allow the creation of really unique characters: since I’m reading the latest work of Abercrombie, Sharp Ends, I will surely add the Throwing Knives to the list since “ You can never have too many knives”

Thanks to Marco Arnaudo for his review of Blood on the Blade!

Following a suggestion of a BoTB player, I’ve revised the Wraith Enemy Sheet including some large skeletons, acting as servitors of their undead masters.

You can find the here the new Enemy Sheet: the Enemy Page in the BoTB menu has been updated accordingly.

As usual let me know your comments!

The first volume of the Aghamon’s Gazette is now available on Wargame Vault: grab your (free) copy here: 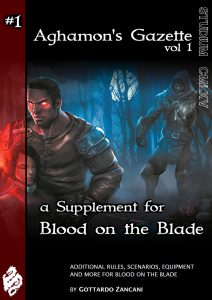 Version 1.0.4 of the rules is now available for BoTB. The main change is the introduction of an extended list of weapons (see the Campaign Tables [II]).

A weapon with a PENETRATION(X) diminishes the Damage Reduction of the target armor by X. Since the DR is a
negative value, you must add the Penetration value X to the
DR to get the modified value

I hope you’ll enjoy the new new combat options for your warriors!

And *very* soon a new (free) expansion will be available on Wargame Vault.

Another Enemy is available here for Blood on the Blade, the Wraith.

Wraiths are are spectral beings and cannot be attacked unless revealed with some magical resource, like for example the Powder of Ibn-Ghazi. And of course, Wraiths can attack your characters even if in spectral form…

Download the enemy sheet for the Wraith right now!