The first review of Blood on the Blade is now available on BGG .

Thanks to Joaquim for taking the time to writing down his comments!

Several people asked me about an example of play for BoTB, to better understand how the game really works on the table. During the weekend I then worked on the first version of the example of play: taking pictures of my table was not providing any real help in visualizing the terrain so I decided to represent the situation with a series of simple diagrams like the one here below 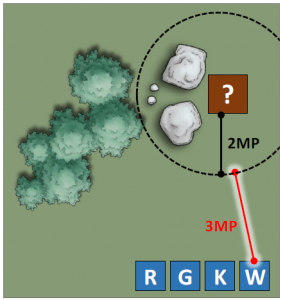 The Example of Play is available here: as usual let me know your comments/suggestions/critiques.

The next free content that you’ll find in this website probably this weekend is the first Challenge for Blood on the Blade. What is a Challenge ? Simply said, a Challenge is a unique Mission for BoTB, a scenario that you will be able to play only once.

Challenges represent special encounters, areas discovered during your exploration of Aghamon, unique contracts stipulated by the warband leader, singular adversaries: due to their uniqueness those missions cannot be repeated. There are currenlty two main types of Challenges: Loot and Reputation; a Loot Challenge will provide special Loot for your warband, while a Reputation Challenge… well, you can easily guess.

So stay tuned for the first Challenge for BoTB!

This armor is used by the Green Islands warriors and is constructed from many long bamboo plates connected to each other by colored cords: each warrior clan use specific patterns and colors of threads. The armor is lacquered to protect against the harsh climate of the Islands.

Those armors are quite rare and cannot be assigned normally to your characters in the Warband Preparation phase; you can instead gain one of those armors as a special reward after a fight against an Enemy Warband as follows:

The PDF version of those rules is available here.

The Green Islands are extremely rich in exotic goods like spices, furs, rare minerals: ancient ruins are visibile in some of the most remote islands, with temples dedicated to now forgotten gods. The inhabitants of the islands are excellent sailors and some of them specialized in the traffic of human beings for the many slave markets. The slavers use long whips to ensare their vicitims, with the help of their black mastiff, and can be a serious adversary for a warband caught unprepared.

So, enjoy this new Enemy for Blood in the Blade: the sheet for the  Green Islands Slavers is available here.

I’m currently working on the new content for BoTB that I’m planning to release this weekend: it’s a new Enemy Sheet focusing on the Slavers of the Green Islands (and yes, they use  whips to capture their preys).

My plan is to release every weekend one “major” content, while other bits of game aids will be released during the week, depending on the time/ispiration.

In the meantime I’m preparing the free expansion that I’ll release for Christmas, tentatively named “The crypts of Aghamon”. More on this on a later post, but the underlying idea is to provide a full set of rules and content to add the dungeon crawl experience to BoTB.

A lot of additional ideas are on my table: new Enemies of course, new equipment, rules for mounted characters, magical items… When you’ll see them published? This clearly depends on the success of the game and on your feedback. So let me hear your voice: what would you like most seen published here ?

The first Companion for BoTB, the War Hound, is now available here!

Now, dogs and wolves are already described in the DYO play aids, so why  a specialized sheet for the War Hound?

There are several reasons:

So let’s grab this new rules for BoTB and let your new trusted friend join the battle! Let me know your comments/suggestions/critics as usual.

The second poll for BoTB is now available, and it’s focused on how do you prefer to see the game content packaged: a single PDF (as it is right now) or a collection of separated PDFs for each component?

I’ve just uploaded on Wargame Vault version 1.0.1 of the rules: it includes several minor fixes on the syntax/grammar (*many* thanks to those that helped me!).

The Character Advancements table has also been fixed: the +1 MP advancement now costs 2XP and can only be selected twice (there is a limit to the speed you can reach of course).

Now working on the next free content, the first Companion…

As anticipated, the first exotic weapon for BoTB, the Whip!

This weapon causes little damage (one single dice) but can seriously harm a unit when the special Entangle attack is triggered. Here below the weapon details, also available in PDF format (a new page has been added to the menu to allow a quick access to the new weapons).

While being a Melee weapon, a whip can be used against a target at 2MP range.

Those effects are always triggered if the attack is successful even if it doesn’t cause any damage.

(4-5): Target entangled (put a marker near an entangled unit as a reminder)

(6): Target entangled, and in addition the attacker can choose one of the following effects

Chocking: target automatically suffers 1D of damage every turn (no DR) until the whip is freed

Trip: the Target must immediately execute a DEX(9) check. If the check fails the target is prone.

Entangled targets are unable to take any action except to attempt to free themselves: to remove the entangling whip, the target must succeed on a DEX(8) or STR(9) skill check. This attempt, regardless the result, is the only action available in the unit activation.

The unit wielding an entangled whip cannot move away from the target nor attack any other unit while the whip is ensnaring the target; the target can be released as a Special Action.

The PDF for this new weapon is avaible here:

I’m finalizing a new Enemy that will use the Whip, so stay tuned. My idea is that every new component for BoTB released here will also include some context around it to make it easier to introduce it in the game.