The next title in the “Blood on..” series will be Blood on the Space: the Sci-Fi background has been requested by a lot of players of BoTB and is also one of my all-time favourites of course (being one of the Star Wars kids).

The jump into the future required some changes to the BoTB engine but the core mechanics are still there: let’s have a look a some of the main elements introduced.

Here below the WIP cover of the new title: 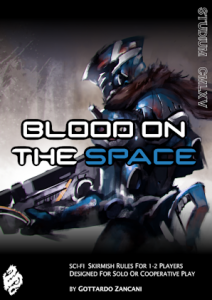 Blood on the Space will be available in Wargame Vault in the first week of April.

Let me know your comments/suggestions as usual.